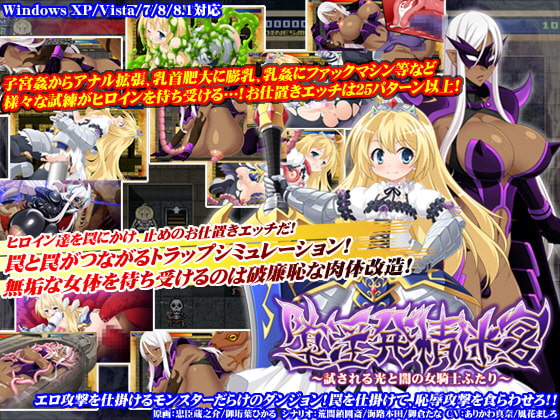 Dungeon of Corruption ~Trials of the Female Knights~ (English version)

It was a land composed of dozens of kingdoms and small, independent city-states, formed from a turbulent history beginning with the Age of the Gods. After much time passed, the many gods gods formed into just two, the God of Light and God of Darkness, worshipped by the people of Valbella. As they watched their worshippers, their apostles, war amongst each other in a battle of Light against Darkness, they spoke to one another.

"Who is blessed with apostles of greater faith?"
The Gods then, on a whim, sent their respective Archangels to the two largest kingdoms which worshipped them with a message.
"Obtain the sacred treasure lost within the greatest ancient temple of your lands."

However, the greatest ancient temple within Valbell was placed upon the borders of the two kingdoms, which thereby prevented the kingdoms from sending their armies, lest the sacred treasure be lost to war. In the place of armies, the two kingdoms decided instead to send the greatest knight of their lands.

The Archangels (you, the player) will act as lords of the ancient temple, now known as the Dungeon of Trials, and will test the two Apostles with traps and monsters as they search for the sacred treasure within!

The apostles will wander, lost, in the dungeon in search of the sacred treasure.

Their final trial will likely begin after they find all four fragments of the sacred treasure.

Read the movements of the Apostles wandering throughout the dungeon and predict where they'll go, in order to place traps along their future path!

Griselda, the Apostle of Darkness, will follow the left wall.

Eliska, the Apostle of Light, will follow the right wall.

In order to render the invincible Apostles defenseless, you have to Armor Break them!

As you combo traps together, the Apostles will lose their divine protection...

...and the longer the combo, the more damage you'll do to them!

In fact, a long enough trap combo may result in an immediate game over?!

- Summon monsters within the dungeon!!!

As you lewdly torment the Apostles, you'll gain the ability to summon more monsters!

An army of monsters to fight the half-naked Apostles!

Certain traps will mold their bodies and bring about great physical changes!

Griselda is the withdrawn general who gathered all the non-humans of the Grumadia Kingdom under one flag. She is merciless to those who do not worship the Darkness and has destroyed many smaller nations with her armies. Her ruthless nature has led to her being known as the Abyss Knight of Anguish.

Eliska is princess of the the Holy Shasta Kingdom, known as the Evangelical Maiden Knight.
She wields her blade in the name of justice and the God of Light's creed, beating back the forces of darkness which attempt to invade her kingdom's borders. She is quite popular among the populace despite her strictness.